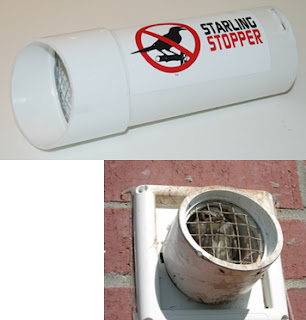 The Starling Stopper is a bird trap designed to humanely and safely remove
baby starlings, at least 1 ½ weeks old, from bathroom and dryer exhaust
vents. The trap itself is 3 ¼ inches in diameter, 9 inches in length and
weighs less than a half pound. It has a clear plastic one-way door to allow
baby birds to enter the trap, and a removable nose cone to allow easy
removal of birds once caught in the trap.

To operate, simply remove the exterior vent cover from the dryer vent in
which the birds are nesting. The mother will typically fly out within 3 - 5
minutes. After insuring the mother bird is out, insert the Starling Stopper
into the vent pipe as far as possible. Seal any gaps between the trap and
the vent pipe with duct tape. Remove your ladder. The mother bird will
return and perch on the edge of the Starling Stopper. She will call her
young into the trap and feed them through the screen on the nose cone.
After 24-36 hours, remove the young from the trap (usually 1-3 at a time)
and place them in a transfer cage to be taken to a rehabilitator, relocate
them nearby or euthanize them, following all applicable local laws.
Re-insert the trap into the vent pipe and repeat until there are no longer
sounds coming from the dryer vent.

Typically starlings will have 2-3 broods per year with 4-6 young in each
brood between March and July. Starlings may carry bird mites and
histoplasmosis spores. Always wear protective gear such as rubber gloves
and a HEPA filter mask when working with or near birds or bird droppings.

Email ThisBlogThis!Share to TwitterShare to FacebookShare to Pinterest
Labels: bird trap, get birds out of vents, starling stopper, starling trap

I have used the STARLING STOPPER for 3 seasons with fantastic results.

I operate an ADC company in Nashville, Tennessee and I invented the STARLING STOPPER because I kept running into a problem with starlings nesting in dryer/bathroom exhaust vents.
My clients didn't want to hear "let the babies grow and they will fly out in 4-6 weeks". They wanted them gone ASAP, especially when they heard about bird mites and Histoplasmosis.
Now at an early age you can occassionaly remove starlings by hand. But when they reach about 2 weeks in age they will elude you by moving deeper into the exhaust pipe. Taking the bathroom fan out of the ceiling is time consuming, potentially damaging and may bring Histoplasmosis spores into the client's house.
The STARLING STOPPER will allow you to trap those elusive juveniles quickly. Many times I have caught the whole brood in one 24 hr period. The babies are alive and healthy because the trap allows the mother to feed them, thus no upset customers or neighbors. Then of course you can install a bird-guard vent cover to prevent recurring problems and your client is very satisfied.
This trap enabled me to add between $5000 and $10,000 in revenue per year and to pick up customers that my competition was unable to help. Feel free to check out the website WWW.starlingstopper.com or email allhours01@msn.com for more information